An extract from The New Radicals. A Generational Memoir of the 1970s (Jacana Media, 2014)

The death of Ahmed Timol in 1971 had drawn me into political activity which extended well beyond the university. My involvement in the Ahmed Timol Memorial Committee, formed in September 1973, played an even more important role in deepening my ‘off-campus’ politicisation. It was chaired by Mohammed Timol, who had been detained at the same time as his brother Ahmed in 1971. Sheila Weinberg, one of South Africa’s youngest political prisoners, who had served an 18-month jail sentence in the mid-1960s, was its secretary. Indres Naidoo, banned after his completion of a ten-year jail sentence for sabotage, played an influential behind-the-scenes role in the committee work, as did his brothers Prema and Murthi. Jeanette Curtis was a committee member, while Helen Joseph, who was listed and could not legally be a member, was also active.

According to Indres, the committee – which soon changed its name to the Human Rights Committee – was set up to ‘keep the spirit of the ANC alive amongst the people’. Its first act was to plan a rally to commemorate Timol’s death in detention two years previously and to call for the release of political prisoners. The open-air rally was scheduled for the Queen’s Park grounds in Vrededorp on 21 October 1973. However, three days before it was due to take place, the state imposed a ban on all public meetings where any government principle or policy would be attacked, criticised or discussed, ‘or which is held in protest against or in support of or in commemoration of anything’.

Jeanette and Sheila contacted me and asked if there was any way my SRC could assist by providing an indoor venue for the rally. If it was held indoors, at Wits, it might just be deemed a private rather than a public gathering. I convened an emergency meeting of the SRC that Friday, and we considered the issue deep into the night. Legal advice sought was ambiguous. Holding a gathering indoors, on Wits premises, might circumvent the ban – but also might not. It was by no means certain that the university authorities would even allow the Great Hall to be used for these purposes. Some SRC members opposed offering assistance to the Timol Committee on political grounds. Finally, the majority agreed that I could offer to host the meeting at Wits, as long as university management agreed to the use of the Great Hall.

Surprisingly, the Wits administration agreed to this without difficulty, despite a warning from the chief of the security police, Brigadier G.L. Prinsloo, that his men ‘would be watching’ and would take ‘suitable action’ if the law was contravened. A member of the police contacted Jen Curtis, warning her that if he thought an offence was being committed at the planned meeting, he would arrest ‘every Bantu at the meeting and the organisers’.

The meeting went ahead in a packed Great Hall without incident. Speakers included Helen Joseph and Rokaya Saloojee, whose husband, Suliman (or ‘Babla’, as he was known), was one of the first to die under security police interrogation. Committee members sat on the stage, each with a placard bearing the name of a detainee who had died in security police custody. Congress veterans were present in large numbers. They included the Reverend Douglas Thompson, an accused in the Treason Trial, who made specific mention of the number of Muslims who had died in detention, and led the gathering in a non-denominational prayer. The Transvaal regional director of Nusas, Jonathan Grossman, as well as a representative from the Nusas-affiliated Johannesburg College of Education, joined me on stage.

I had suggested that Mohammed Timol chair the meeting, both because he led the committee and because the death of his brother was being commemorated. Declining the offer, he asked me to chair, arguing that this would solidify the alliance developing between his committee and Wits students, something he was keen to strengthen. Over the next few months, I worked closely with the renamed Human Rights Committee, producing pamphlets and a bulletin from the SRC offices, and meeting often with Indres Naidoo in Doornfontein. Reggie Vandayar and Shirish Nanabhai, who had been sentenced with Indres and also imprisoned on Robben Island for ten years, were often present. I assumed that they, too, were part of the group working to ‘keep the spirit of the ANC alive’. 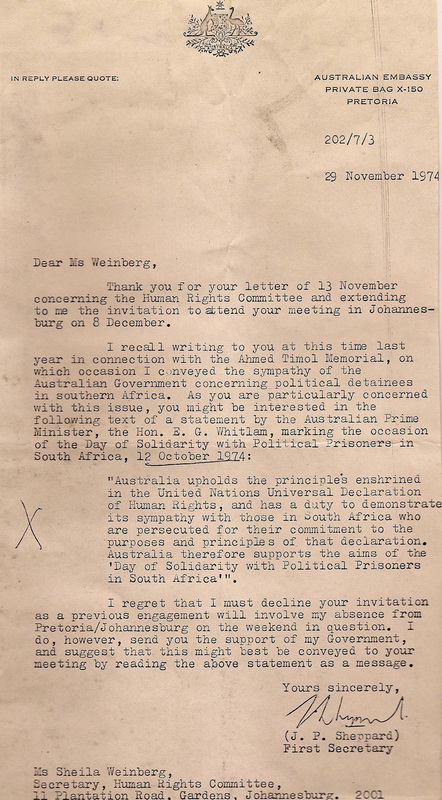