‘The Durban tour’ to launch The New Radicals

Somehow, as a result of this, I was elevated to the informal status of an elder, apparently with a long and rich memory. Members of my political generation began suggesting  – possibly in an effort to stop me telling stories – that I should write a book about the development of radical anti-apartheid politics. I procrastinated for as long as possible. Perhaps, I used to say, I’ll do this when I have more space and time, when I retire.

And so the evil day drew nearer. Gradually, in the way these things happen, this imprecise idea began developing form. In discussion with friends who shared this history of political engagement, I began to identify some themes, and to add flesh and content to an embryonic plan.

I wanted to record some of the stories about anti-apartheid politics in the first half of the 1970s. I also wanted to locate that politics, to explain how it developed and identify some of its influences. There were also some towering figures from the period who played significant roles in radical challenges to what existed in the 1970s, but whose names and legacies were being lost. I wanted to remember them, and record a little of their impact, while at the same time acknowledging a generation of young activists, on both the black and the white campuses, who dared to imagine a different way of thinking, of being, of acting.

Some of the most significant initiatives, moments and events of 1970s opposition politics had failed to find a place in the history being constructed and recorded, post-apartheid. To some extent, this was because that history did not sit comfortably with the new orthodoxy being developed. On this version of history, the most significant reasons for the imploding of apartheid rule derived from outside of the country: the national liberation movements and their allies in exile; sanctions and boycotts; the armed struggle and international pressure. Internal organisation, strategy and initiative did receive its acknowledgement, especially in the later years of the 1980s when the UDF and Cosatu were often presented – and indeed presented themselves – as aligned with the strategies of the ANC in exile.

However, the politics which had developed in a largely ‘home grown’ and independent manner within the country - the politics of the Durban strikes, of black consciousness, of new left and Western Marxism, of democratic socialism, of June 1976, of student campaigns on the Nusas campuses, of the wages commissions and the new union movements – these were (and still are) largely left out of the complex causality which brought the country to February 1990.

I wanted to make a small beginning in correcting these historical distortions.

I had been involved in much of what I intended writing about, and my first source of information was going to be the memory which friends claimed was rich and detailed so many years later. But The New Radicals was never planned as an autobiography, or even as a record of individual initiatives and engagements. That is why it is sub-titled ‘a generational memoir’. It is about a generation’s contribution to the development of a new political radicalism in the 1970s. This grew from the defeats of the 1960s, when militant politics was destroyed, when a culture of fear came to dominate within the country, when an understandably cautious multi-racial liberalism occupied what little space there was for political opposition.

It is the story of social context, developing strategies, deepening understanding and the construction of a collective activism.

By the end of the 1960s, the organisations of national liberation were struggling for survival in exile; leadership was banned and imprisoned. The progressive trade union movement had been decimated, both as a result of state action, and the incorporation of many of its best leaders and organisers into the underground sabotage campaign.

From these ashes, phoenix-like, a whole new generation of political activism arose – initially on the campuses, both black and white, and then within the broader society. The influences were many and varied: black consciousness’s challenge to multi-racialism, which had been seen as a non-negotiable principle of organisation and an act of political resistance in and of itself; growing radicalisation on the Nusas campuses, which increasingly came to see capitalist development and apartheid as involving a symbiotic relationship, rather than as being in conflict; the development and influence of non-Soviet and western forms of Marxism which challenged the intellectual basis of existing anti-apartheid understanding, analysis and strategy.

I have already made mention of the centrality of memory in The New Radicals. That was the first port of call trying to record the texture, issues and themes of the period. However, having explored and probed memory – mine, as well as others – as far as possible, I then turned to more conventional historical and political sources: archives, documents, publications of the time, secondary material – as a way of checking, validating and correcting the specifics of memory.

The book, then, is something of a hybrid. It includes political history, interpretation, story telling, personal history. It is primarily occupied with developments in and around Johannesburg, although I would like to believe that its themes parallel what was taking place in other urban centres such as Durban, Pietermaritzburg and Cape Town.

One of the more interesting questions posed in the book relates to the reasons why and how individuals and groups sometimes act in ways opposed to their immediate and material interests. Students on the predominantly white, Nusas affiliated campuses in the 1970s, had every reason to accept the socio-economic status quo. They were almost guaranteed upward mobility, good employment, material comfort, security and stability. All they had to do was to follow the trajectory mapped out for them by the parents, by their universities, by the mainstream of society, and keep their objections to the excesses of apartheid within narrow parameters.

A range of factors intersected and collided to loosen the glue which bound students on these campuses to the status quo, what black consciousness leaders often called ‘the system’. These included the challenges mounted by BC itself; the impact of challenges to systems of thought and explanation, including Western Marxism and the new left; the radicalisation of Christianity and the organisations associated with Christian opposition; the challenges to established liberalism; and the rejection of established authority under the influence of the ‘counter-culture’ and the lifestyle choices which went with that anti-authoritarianism.

These influences coalesced in what Tony Morphet famously called ‘the Durban moment’, when black consciousness challenged the liberal multi-racialism of Nusas; when the first wages commission was established at the University of Natal; when a new intellectual project to question everything that existed in literature, in the social sciences, and in political philosophy gained traction; and when cultural and lifestyle choices loosened the bonds between students and the rest of society.

The Durban Moment included challenges derived from intellectual traditions of existential philosophy, political economy, democratic socialism and the new left. A  focus developed on strengthening and organising workers on the basis of class interests rather than racial identity created the impetus for the wages commissions. The mutually reinforcing relationship between political apartheid and capitalist economic development formed an important element in the growing critique of political and economic liberalism.

A number of recurring themes run through the pages of The New Radicals. These include:

Developing the distinction  between non-racialism and multi-racialism. The new radicals had a conviction that the Congress Alliance was based on a non-racialism which rejected race as a key element in political identity. We believed non-racialism prioritised identities associated with workers, or those in the impoverished and rural areas, or communities resident in the township, or gender. In retrospect, I think it is evident that the Alliance predominantly embraced multi-racialism, rather than non-racialism; that its analysis and strategies were based on acceptance of racial identities and interests as the central fault line in South Africa’s socio-economic structure.

Attitudes to the mainstream national liberation movement. This awakening of a new political radicalism did not develop in opposition to the exiled organisations of national liberation. Generally, however, they were not an influence on this moment. I have argued in The New Radicals that their very absence created the space and context for a generation to develop a relatively independent, ‘home grown’ politics in response to the changed circumstances of the 1970s. Without access to historical precedent and experience, and in the absence of a previous generation of leadership and organisation, the new radicals were forced to find new and innovative ways to understand and then challenge the society they rejected.

Many of us saw ourselves as operating within a broad, left leaning Congress Alliance tradition, especially where this aimed to strengthened working class and socialist interests within that alliance. This explains the focus on and effort to popularise the Freedom Charter as part of the Release All Political Prisoners campaign and the months’ long programme on the history of opposition which preceded it. In some ways, we ‘imagined’ an older and wiser Congress Alliance, attributed various strengths and positions to it, and then located our radicalism within that trajectory.

Other themes which occupy some of the book’s pages involve the critique of liberalism; socialism, Marxism and the new left; the involvement of intellectuals and students in the setting up of the Industrial Aid Society in 1974 and the conflicts which beset that organisation in 1975.

The system of long-term detention, especially under Section 6 of the Terrorism Act, receives attention in the book, both in terms of some of its history, but also as a factor in the radicalisation of the 1970s student generation.

Two chapters explore state responses to the new radicalism, focusing in particular on the state’s inability to understand how these radical challenges differed from resistance politics of the previous decades.

The New Radicals begins by noting that political history and memoir has no natural beginning nor end. It does, however, require framing to give context and structure. A final chapter, appropriately entitled ‘Bookends’, provides one of those frames, where I reflect in particular on some of the issues of political loyalty, commitment and betrayal.

My time in Durban has included two seminars on The New Radicals, one hosted by History and African Studies at the University of KwaZulu-Natal, the other by Urban Futures at the Durban University of Technology. One of the most striking features of these has been the hunger of so many people to explore the way in which the politics of the past ‘talks to’ the current political malaise. A strong need to discuss and recover the politics of resistance and challenge within the country during the 1970s and 1980s is also evident.

I hope The New Radicals can make some contribution to this process, to assist in the recovery of an important part of the past and the discussion about what history can tell us about the present and the future. 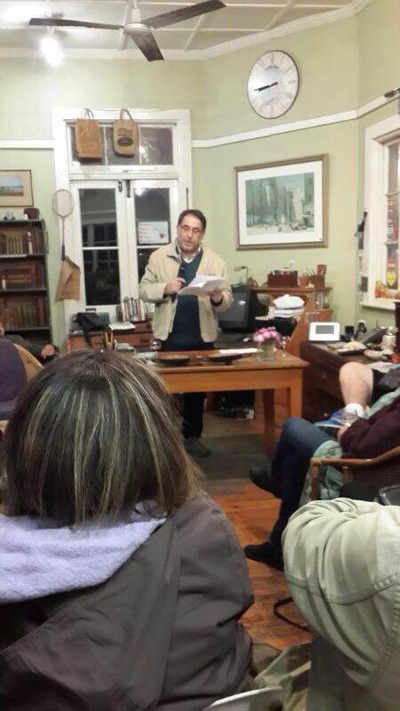 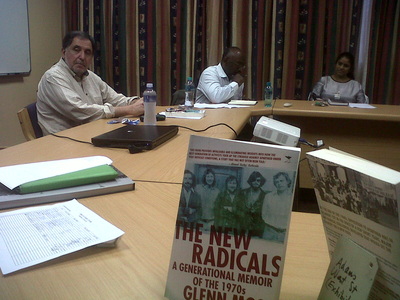 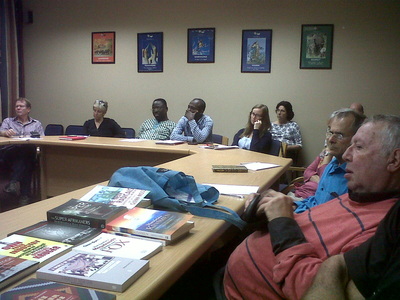 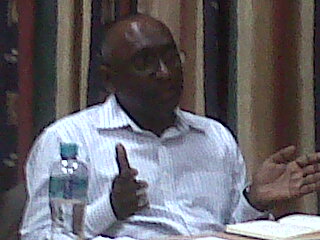 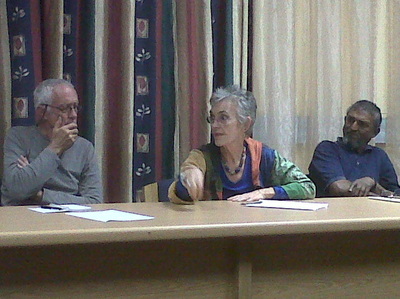 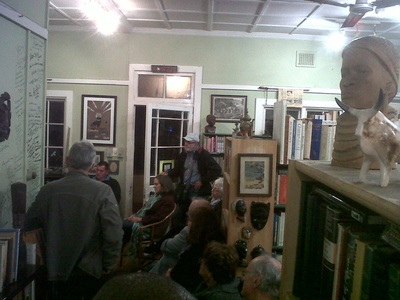 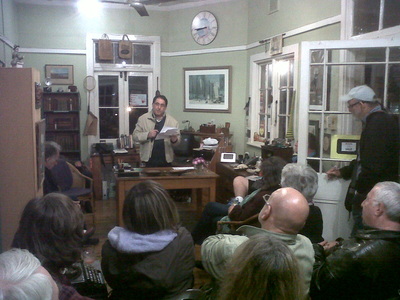